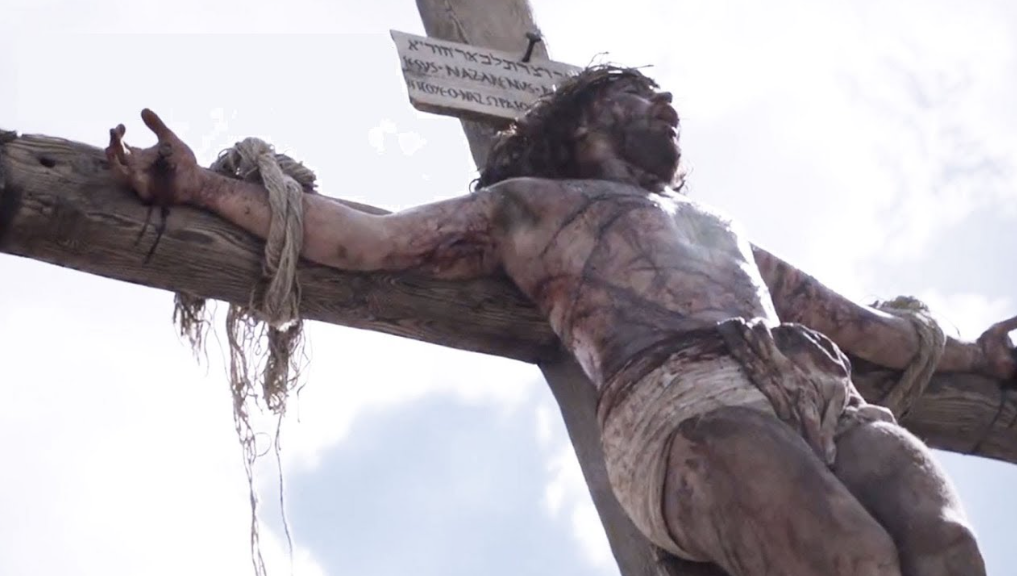 Most of us are pretty familiar with the Lord’s Prayer.  (Matthew 6: 9-13)  The prayer concludes, “And lead us not into temptation, but deliver us from evil.”  In most of the Protestant churches I’ve attended, at the end of the prayer, they immediately add, “…for Yours is the kingdom, the power, and the glory forever.  Amen.”  In Catholic churches, the priest adds another short prayer between, “deliver us from evil” and “for Yours is the kingdom…”

Not too long ago, something struck me about that final phrase, “Yours is the kingdom, the power, and the glory forever.”  I was looking at the crucifix behind the alter and saw the parallels to what we were saying.

The Kingdom
During His time on the cross, a lot of people mocked Jesus: the men crucified next to Him, the Jewish leaders, and the Roman soldiers.  Most people know why the Jews (on the ground and on the crosses) mocked Him (“You’re the Messiah… save yourself!”)  The Roman soldiers, however, didn’t care about that.  They mocked him for a different reason.  To them, subjects always died for their king, and there was no one around dying for Jesus.  To them, this wasn’t kingly behavior – they’d never seen a king die for his subjects.

Sidebar:
When the Romans crucified someone, they attached a sign over their heads containing their name, their hometown, and their crime.  Jesus’s sign read, “Jesus of Nazareth, King of the Jews”.  That took some time to set in for me.  Jesus’s “crime” was being the King of the Jews.  (Does it seem like the punishment fit the crime?)  When Pontius Pilot had posted the sign, the Jewish leaders came to him and demanded that the sign be changed to “this man claimed to be the king of the Jews.”  (John 19: 21-22)  Pilot responded, “What I have written, I have written.”  Someday I’ll ask if he did it to spite the Jewish leaders, or if he actually believed it.  He didn’t strike me as just too lazy to change it.

And of course, every king needs a crown, right?

When Adam and Eve had sinned and were forced from The Garden, “all of creation fell, too.”  Animals began eating each other, Adam was forced to work for food, and thorns sprang up from the ground.  It seems fitting that when the Romans placed the crown of thorns on Jesus’s head, they were also symbolically laying Man’s sin on a sinless victim to be sacrificed.

The Power
Catholics see so many crucifixes that we can go numb to what we’re seeing.  We forget that we’re looking at an innocent man who suffocated on his own blood, having been nailed to a tree.  He’s virtually naked, and his arms are stretched helplessly out to the sides.

Typically, when we look at someone, there are two things that immediately convey their position in this world: their clothing, and their posture.

For Jesus to be stripped to his undergarments (especially in the fully-clothed society of the ancient Middle East) and his body stretched out open like that, He seems to be in anything but a position of power.  What constantly stands out to me, though, is this: when you welcome someone you’re really excited to see, how do you hold your arms?  Stretched out wide, ready to embrace them, right?  Exactly.

The Glory
Crucifixion was a disgraceful way to die.

Even to the ancient Romans, who were not known for their compassion, crucifying someone was considered too barbaric for its citizens – only non-citizens could be crucified.  Citizens who were condemned to die were beheaded.  (And by the way, the practice of “scourging” someone was also reserved for non-citizens – it was illegal to scourge a Roman citizen, no matter what they did.)

As I heard one preacher say,
“Do you know when people first started wearing crosses as jewelry?  It was after the last person who witnessed a live crucifixion had died.  Crucifixion was such a brutal death that no one celebrated it.  No one even talked about it.  It’d be like wearing an electric chair around your neck today, or a hypodermic needle, or a noose.”  Glory?  Definitely not.  The cross was the ancient equivalent of Hitler’s gas chambers, reserved for the lowest, “sub-human” (<- Hitler’s words, not mine) of society.

I bring this up as a reminder (maybe to myself) of what our goals as Christians should be.  Not to be literally crucified.  But to give, and give ourselves.  To serve.  To welcome.  To love, especially those who don’t love us.

Or to paraphrase Matthew 5: 38-42, if someone punches you in the face, do you think you could invite them to do it again, without hitting them back?  Or if someone on the street demands that you give them $5, would you hand over another $20 as well?  Or if your neighbors dumped their leaves in your yard, would you go and help them sweep off their decks?

“Ideals are like stars; you will not succeed in touching them with your hands, but like the seafaring man on the desert of waters, you choose them as your guides, and following them you will reach your destiny.”

God showed us how to love, and a lot of times, it looks a lot different than what we expect.  Can we live up to His example?  My guess is “sometimes ‘yes’, most of the time, ‘no’.”  But still, it’s worth trying every day.