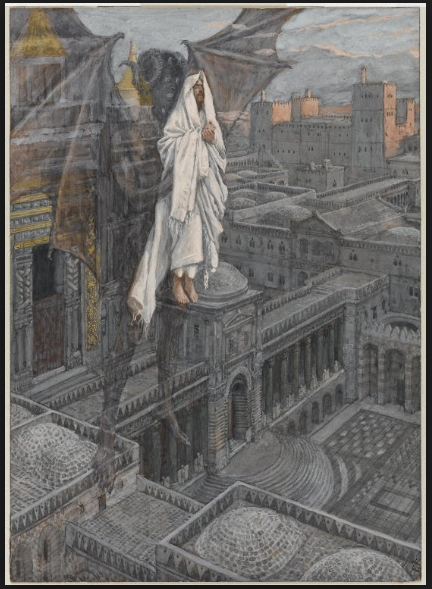 For those unfamiliar, the Christian season of Lent started last Wednesday.  It’s a 40-day period (46 days, not counting 6 Sundays) to commemorate the 40-day fast that Jesus undertook in the desert before beginning His ministry.  At the end of His fasting – when He was at His weakest, by the way – the devil came to tempt Him into disrupting His work.  What those temptations meant – and how Jesus handled them – is a great inspiration for the times when it seems oh so… tempting to try and sneak something past God.

You can read the account in Matthew, 4:1-11.  It’s only 11 short verses, but the implications are enormous.  And when you look at the devil’s onslaught against Jesus, I’m sure you’ll be able to draw more than a few parallels to the times the devil waived something flashy in front of your eyes, and maybe in it, you can find a little encouragement, too.  All of these temptations, by the way, Jesus overcomes as a man, not as a super-natural being.  So Jesus knows what we’re going through when we’re tempted.  He’s been there, suffered that.

1. The devil tempts Jesus as a man:
Jesus had been fasting in a desert for 40 days and 40 nights.  He was hungry.  So of course, Satan’s first appeal is to His human needs: “If you are the Son of God, tell these stones to become bread.”  (Verse 3.)

Now, that seems fairly innocuous – “you’re hungry.  Make yourself something to eat.”  I say that to my houseguests all the time, but I never mean it in a bad way.  And even later on, in the same book, Jesus is hungry, and He approaches a fig tree looking for something to eat.  When He sees that it’s barren, He curses it, and it immediately dies.  Matthew 21: 18-19.  Why is this a big deal?

I’ve fallen into this trap a lot.  God has given me quite a few gifts, and if I go through and list them down the left side of my mind, in the column to the right, I can think of times when I’ve misused each of them for my own benefit.

Jesus’s response?  He quotes Deuteronomy (8:3), a chapter in which God reminds Israel why He had them wander the desert for 40 years – to remind them that they needed Him.  “It is written: ‘Man shall not live on bread alone, but on every word that comes from the mouth of God.’”  In other words, “bodies die.  It’s more important to be obedient to God.”  (By the way, the next verse: Deuteronomy 8:4 “Your clothes did not wear out and your feet did not swell during these forty years.”  Even though God corrects our behavior, He never abandons us.)

Sidebar:
There’s also another parallel here.  In John’s gospel, he refers to Jesus as the Word of God.  (John 1:1)  For Jesus to say that “Man shall not live on bread alone, but on every word that comes from the mouth of God,” He’s also saying, “My work is more important than any physical needs I have.”

2. The devil tempts Jesus as the Messiah:
The devil first tried to appeal to Jesus’s human needs, and Jesus said that His work is more important.  So, he tries to tempt Jesus on those grounds.

He takes Jesus up to the highest point of the temple and tells Him, “If you are the Son of God, throw yourself down. For it is written: ‘He will command His angels concerning you, and they will lift you up in their hands, so that you will not strike your foot against a stone.’”

Again, Jesus responds by quoting Deuteronomy (6:16), “It is also written: ‘Do not put the Lord your God to the test.’”

I used to read this and think, “okay, don’t test God.  Got it”  While that literal interpretation certainly holds, I recently learned of another perspective.  In a wonderful radio sermon, Pastor Lloyd Pulley explains a much deeper implication.  At this point in history, the highest point of the temple would have been directly above the court of the priests and religious leaders – basically, the center of all temple activity.  The common opinion of the time (based on Malachi 3.1) was that the Messiah would come into this world in grand fashion, descending from the sky into the temple.  And for Jesus to jump from the pinnacle of the temple and land without injury, He would have descended (quite grandly) right into the middle of the power seat of Judaism.  All the religious leaders would have witnessed it, and there would have been no doubt that He was the Messiah.  (Apparently, that would have been the irrefutable “proof of God” that I referenced in an earlier post.)  Basically, the devil was offering Jesus the easy path to convince Israel that He was the Messiah.

The only problem was that if Jesus had taken that route, He wouldn’t have been killed as a sacrifice for our sins, and we would have remained separated from God.

3. The devil tempts Jesus as the Son of God
The devil has unsuccessfully tried to convince Jesus that there was an easier way to get people to follow Him, but Jesus insisted that more important than being immediately recognized as the Messiah was the redeeming of souls.  So the devil goes there next.

Verse 8: “The devil took Him to a very high mountain and showed Him all the kingdoms of the world and their splendor. ‘All this I will give you,’ [the devil] said, ‘if you will bow down and worship me.’”  In other words, the devil was saying that ‘if you recognize me as God, you can have all these people.’  (I envision him saying it with a disgusted snarl, as though the term “people” was pejorative in itself.  To a fallen angel who despises everything about them, maybe it is.  Like the way we talk about mosquitoes.)  Basically, “I’ll make your work easy if you worship me.”

I read that and think, “yeah, right.  Like the devil would have just backed off of his assault on humanity.”  I hope you can appreciate my cynicism that the Father of All Lies can’t really be trusted in his promises.

Jesus’s response?  “Away from me, Satan! For it is written: ‘Worship the Lord your God, and serve him only.’”

Sidebar:
Pastor Lloyd makes a good point here that when Jesus turned down “all the kingdoms of the world,” He did so because He values us so much more than that.  More important than being the Undisputed Ruler of Everything, God wants to have us close to Him.  I agree.

I actually shudder to think of how the world would look if Jesus had given in to this last temptation; if He had allowed Satan to take the place as the ultimate ruler.  The closest approximation I can think of would be all the violence and baseness of the animal kingdom, raised to the power of deceitful and malicious human intellect and sponsored by demonic encouragement.  In that case, I would have preferred not to have been born.

Because of Christ’s sacrifice, no matter how terrible life gets, there’s an eternity of joy waiting ahead, and it’s enough to make us forget about anything bad we went through while wearing these bodies.  If Christ never made that sacrifice, it would be an eternity of suffering, as we in our sinful nature would have rightly been barred from access to a perfect and loving God.  So with Satan ruling over the world, you’d have a terrible terrestrial life, and a terrible spiritual eternity.

Thankfully, that’s not the case.  For all this world’s shortcomings, at least “Good” eventually wins.  The world is no longer under Roman rule.  Kings no longer behead people at will.  The Nazis didn’t win WWII.  After Christ died and rose again, people began to forgive people and to love them, and the world began its long, gradual turn toward a better place.  More or less, and despite what the mainstream media outlets report, I believe it’s still heading in that same direction, as in general, most people aren’t malicious all the time.

All of this is possible because Jesus dutifully obeyed God’s command, and used His life for the purpose God intended.  And that’s not easy to do: as Pastor Lloyd said in his sermon, “All temptations offer an alternative and seemingly easier out than [what] is right.”

Now surely in our own lives, none of us bear the same responsibility for humanity that Jesus did.  But, as I mentioned in my last post all of us are called/used to bring about good.  And sometimes, it’s a challenge to live the life God wants us to.  I struggle with it just like anyone else.  It’s especially hard when I think no one else is looking.  Though the world-wide consequences of me giving in to temptation are dramatically less than if Jesus had given in, it still keeps me from nudging the world a little bit in the right direction.  When it’s all said and done, I want to be counted among those God used for good, not among those that He had to work around.

One final note: Jesus’s responses all came from the book of Deuteronomy, specifically sections and verses that deal with the correction of a wayward Israel.  The Israelites had disobeyed God (a lot), and these were some of His corrective messages.  Here, 1400 years later, God is using for good what came out of someone falling short.