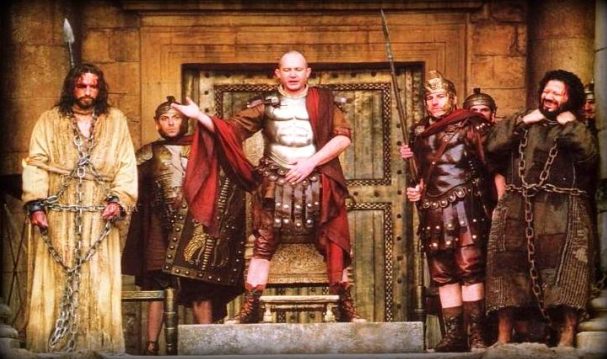 For most of my life, I resented Barabbas.

Sidebar:
Pretty much every Christian knows the story around Jesus’s crucifixion. In a sham trial, Jesus was “convicted” of blasphemy. According to custom, the local Roman ruler could have let him go. Instead, the ruler feared a(nother) rebellion as the Jewish leaders provoked a crowd to demand the release of a revolutionary and murderer, named Barabbas.

Hearing that story, I automatically assumed that Barabbas was obviously a bad guy, someone who should have been executed. Instead, they executed Jesus, who never did anything wrong. And it always bothered me that a zealous mob would be willing to let a known murderer walk free while killing the only good thing to ever come into their lives. Part of me always blamed Barabbas.

Now, part of the reason for the “Plus One Bible Blog” name is that I want to try and bring some attention to the “other” characters in the Bible. The “extras”. So in that vein, imagine, for a minute, what it was like to be in Barabbas’s position.

Legally, yes, he was guilty of murder, but it wasn’t in cold blood over some wayward insult. And he wasn’t a Roman citizen who just wanted to topple the government – he was condemned to be crucified, and it was illegal to crucify a Roman citizen. We don’t hear much about him, but my guess is that he was a Jew, and part of the faction that believed God (and not Rome) had sole jurisdiction over the Jews. And it would make historical sense that he was fighting for Jewish independence. (In that time, there were several uprisings attempting to alleviate the Jews from Roman oppression.) In his mind, he was doing what he thought was right. And now, the Roman government convicted him of murder, and he was as good as dead.

So there you are, sitting in a dark prison cell, somewhere underground. Awaiting execution. You’ve just spent a sleepless night agonizing over the excruciating death that was waiting for you come daybreak. Your cross had been prepared and was waiting for you outside. And all the stories you’ve heard about crucifixions come flooding back to you: people hanging there alive for 13 days… no one has ever died quicker than 36 hours… animals that have started eating before the victim was dead… Now, it’s your turn, and there’s no way out of it.

In the morning of your execution, you hear the guards coming… for you. Dead. Man. Walking.

The jailor opens the cell, and as you struggle to simply keep breathing, he says, “you’re free. Go home.”

You walk past the jailor and his guards, out of the prison, and back into a world you thought you’d never see again. And everything has this surreal glow as you still try and make sense of what happened. “Relieved” doesn’t begin to describe it.

For me, my attitude about Barabbas changed when a pastor reminded me that all of us were Barabbas. We’ve all committed “crimes”, often times thinking we were acting justly, and the penalty for that is spiritual death (a.k.a. “separation from God”, a.k.a. “hell”.) But as we’re sitting in our cells awaiting the morning of our execution, Jesus steps forward and says, “No. I’ll take the punishment. You are free. Go home.”

We never find out what became of Barabbas. I wonder if he sat in his cell on that Passover night praying that God would somehow deliver him from his fate. Do you think he went to the execution later that day to see what was happening? Do you think he started asking around about the man who took his place on the cross? What did he do with his life after that? I have to believe that he left that day a changed man. When I finally realized that Jesus died so I don’t have to, I know it changed my life.

Barabbas, I hope to talk to you in heaven one day. I hope that you heard about the Man who died directly for you, and that you learned about His life, His message, and His love. I hope you embraced the real gift He offered, the one that far exceeds merely taking your place on a cross. Sure, as a fellow sinner, I’ve got a lot of questions for you. But more than my own curiosity, I hope for you the same thing that I hope for everyone, that you simply accepted the gift that God offers us all – to let go of the sins that weigh us down, and to live forever as His child.